It was a courageous night of competition racing as our drivers battled against the elements.

Alex Gilmore of Elevensies ran the fastest lap, in what turned out to be the only dry race of the night. His time was 39.310 seconds, which was only a hair behind his fastest and the fastest of the competition.

Elevensies also won the most points for the night, with a total of 40. Team X and the Snake Pit Stingers weren't far behind though, scoring 35 points and 33 points respectively.

The Elevensies' Alex Gilmore crossed the finish line first. He only narrowly missed out on beating the fastest lap time of the competition so far - a time which he also set.

Team Jing are improving with every race, and despite securing their 3rd loss of the season, they came off of the track smiling. This was the first and only dry race of the night.

Our racers were barely off the starting grid when the storm hit, hard. It didn't stop Team X or Team Zoysa though, both teams ran a great wet weather race in very challenging conditions.

Special mention goes to Tony Ismail of Team X who was the first (but not last) racer of the season to earn his 3rd straight win. Congratulations Tony!

From race 2 onward, it pelted down, absolutely drenching the track and everyone on it.

The temperature hit a low of 5 degrees, making the night both wet and freezing!

Undeterred by the pelting rain and howling wind, Team Ramrod and Team Skid Marks took to the track for a series of properly wet and wild laps. In the finish, there were only 5 points the difference.

Team Ramrod's Russell 'the Enforcer' Kennedy won his third race of the season, making it a hat-trick of three wins in a row. Team Skid Marks' Maruf Ahmed came in a close second.

The last race of the night was another wild one with the track covered in a thick layer of rain water. Both teams, however, rose to the challenge and drove commanding laps.

The Eighty Ficks' Brett Porter took out his first win, in what was also his very first race of the season, while the Snake Pit Stingers' Erin Darragh secured second place thereby leading his team to victory. 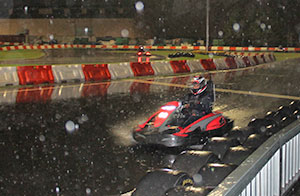 Round 4: the teams to watch

Team Skid Marks missed out on a few points this round, and that has pushed them down the ladder.

However, we do expect to see them bounce back in the next round.

Read about all the thrills and spills of the second round of the Rapid Finance League Cup 2 ... Read more

Read about all the thrills and spills of the first round of the Rapid Finance League Cup 2 ... Read more