League Cup 2 kicked off with some excellent racing, with Skid Marks winning the round.

Race 1 was dominated by Maruf Ahmed of Skid Marks who won both the qualifying and the race. His team mate, Aykan Sengoz, came in second place, just 1.400 seconds behind.

All in all, it was a convincing victory for Skid Marks who won the night and are now on top of the League Cup 2 Ladder.

In Race 2, Tony Ismaili of Team X took out the qualifying and the race while double setting the the second fastest lap of the night with a time of 39.239 seconds.

Amit Ismaili of Team X had a good comeback after qualifying seventh and finishing fourth in the race. Snake Pit Stingers learned a lot from the race and will be coming back stronger in round 2.

It was a chilly at the track with a low temperature of ten degrees.

The sky was clear and it made for a crisp night.

It was a solid win for Alex Gilmore of Elevensies, while teammate Ash Miles qualified first but finished the race in fifth place after some costly mistakes.

There was a fierce battle for second place, but Lee Spicer of Eighty Ficks managed to take out the second spot after some spectacular driving that kept Cory Bridges and Brent Mekis from Elevensies in third and fourth place, respectively.

Not only did Russell Kennedy of Team Ramrod win the qualifying and the race, but he set the fastest lap time of the night and the completion so far, with a blistering 39.182 seconds.

Team Ramrod outperformed Team Zoysa to take home the win. Team Zoysa made a few mistakes, but they’re sure to learn for them and come back harder next week. 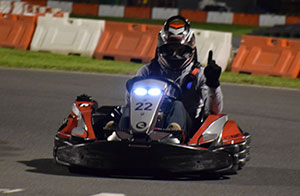 Round 2: the teams to watch

Next week, the competition is sure to heat up even more when Skid Marks and Elevensies go head-to-head!

Read about all the thrills and spills of the first round of the Rapid Finance League Cup 1 ... Read more