It was an intense night of competition racing, with plenty of jostling for the top spots!

Alex Gilmore of Elevensies set the fastest lap of the evening, with a time of 39.083 - which is also the fastest lap time of the competition so far (that includes both League 1 and 2).

Team X won the most points of the round with a total of 40, and this cemented their place at the top of the competition ladder. However, Skid Marks are definitely hot on their heels!

Team X was unstoppable in the first round of the night. They took out the first five spots in both the qualifier and race, while their top racer Tony Ismaili claimed his second victory of the season.

Unfortunately, due to unforeseen circumstances Team Jing Captain, Jing, was unable to race. However, his teammates raced on valiantly, securing a total of 15 points in the finish.

The spectators were on the edge of their seats as SK and Maruf of Skid Marks and Corey and Alex of Elevensies furiously battled it out for the top four stops.

Alex secured the fastest lap of the night and of the competition thus far with a time of 39.083. However, at the end of the race, he was unable to crack the top three; he finished fourth.

It was an icy cold night, with temperatures dropping to as low as 6 degrees!

Despite the chill, the skies remained clear, for a night of dry racing.

The Snake Pit Stingers dominated. The team's racers placed first, second, third, and forth, with their top three racers all finishing more than 7 seconds faster than the next in line.

Not to be outclassed, Team Zoysa ran a consistent race, with plenty of smooth turns and swift movements. What they lacked in points they more than made up for in heart!

It was a night for close races! Team Ramrod, like Elevensies in Race 2 snared the win by just 1 point. Russell Kennedy of Team Ramrod won first place, though, powering through both the qualifier and the race.

Lee Spicer of Eighty Ficks ran an incredible race too. He finished just fifth in the qualifier, yet he fought his way up the grid during the race and finished in second place. 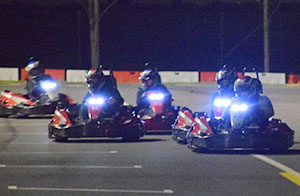 Round 3: the teams to watch

Skid Marks and Eighty Ficks both lost by just 1 point this week.

That means they'll be extra hungry for victory next round!

Read about all the thrills and spills of the first round of the Rapid Finance League Cup 2 ... Read more