Things are heating up (literally) as we get closer to the end of the League Cup season. There's just one more round before finals!

Team Zoysa had the biggest win of the night, scoring a convincing 37 points over Team Jing with 18 points. It was Asela Zoysa who led his team to victory, taking out the top spot.

But the biggest thrills of the night came with two extremely close races. Skid Marks and Snake Pit Stingers were separated by just one point while Elevensies and Team Ramrod had a three-point margin.

Asela Zoysa of Team Zoysa had a great qualifying and won the race, four seconds ahead of Sini Wick, also from Team Zoysa.

Spencer Yang from Team Jing put in a great effort and finished fourth. Once again, Team Jing improved on their score from the last round as they continue to get faster.

This race was a real nailbiter with only one point separating the two teams! Aykan Sengoz of Skid Marks put in a phenomenal effort to win the race after qualifying fourth.

Kent Wardell of Snake Pit Stingers came in second, just 0.175 seconds behind Aykan. This race couldn't have been closer!

It was a wet and cold night down at the track with a temperature of 8 degrees.

On the bright side, it's warming up and conditions are improving as we head into finals!

Amit Ismail of Team X took out a solid win to keep his team on top of the league. His teammate, Raf Puszkar had an unlucky race and finished seventh after qualifying third.

Another close race with just a three-point margin! Mathew Lau took out the win for Team Ramrod, fighting off three drivers from Elevensies to do it, what a drive!

Elevensies put in a good drive and scored 29 points to win the race overall. Brent Merkis and Cory Bridge came in second and third respectively. 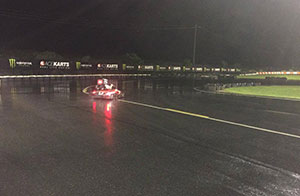 Round 5: the Teams to Watch

Snake Pit Stingers will need to race hard against Elevensies to hold onto their finals spot.

Team X vs. Skid Marks is sure to an intense race since Skid Marks are just two points out of finals contention.

Our racers braved the wet and cold to run a series of blistering laps in very challenging conditions. ... Read more

Read about all the thrills and spills of the second round of the Rapid Finance League Cup 2 ... Read more